This meme has been appearing frequently in my Twitter feed lately (origin unknown): 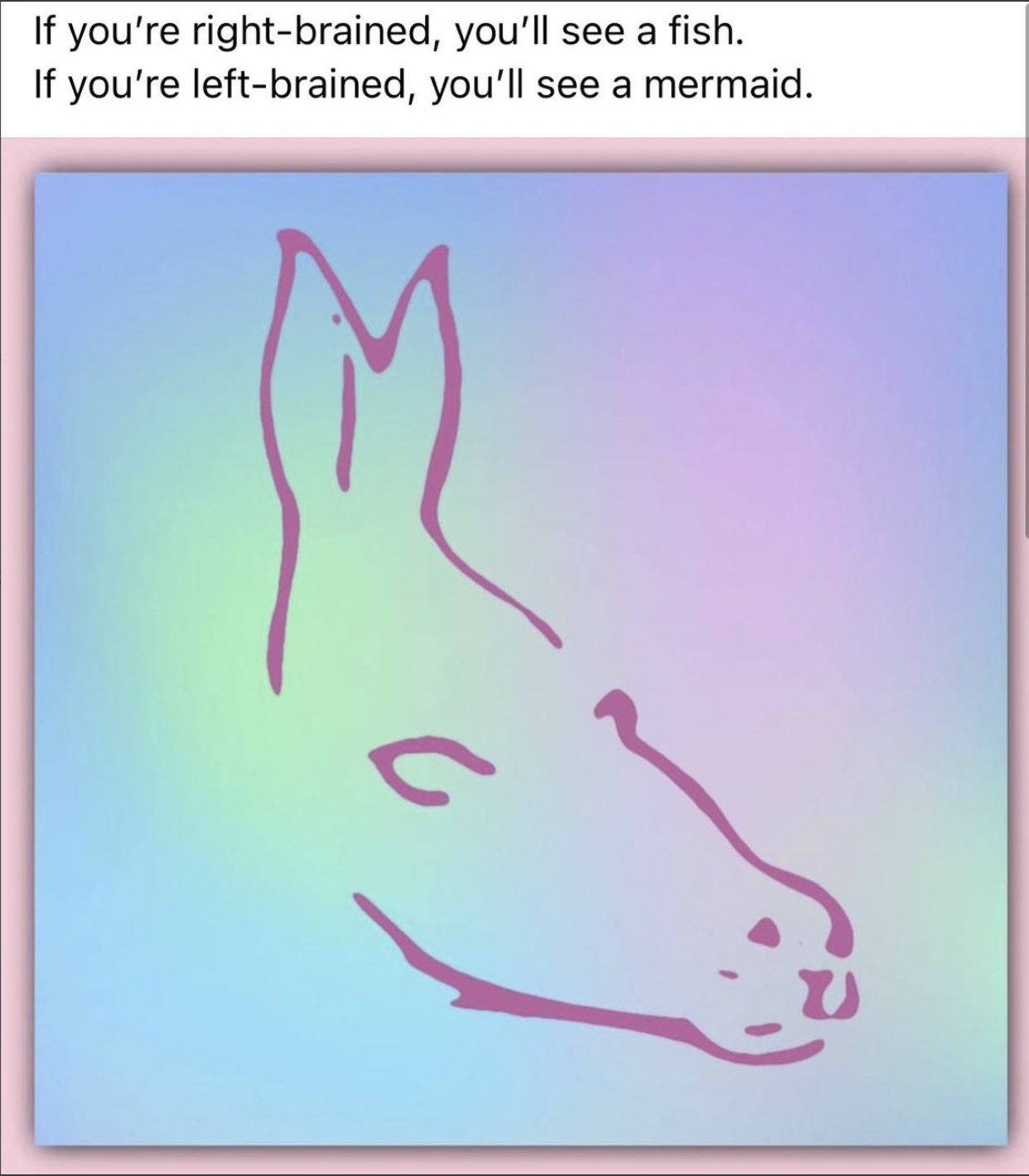 I don’t know about you, but I see a horse’s head with bunny ears. And when I focus on the horse’s snout and try to see a face in it, the whole shape becomes a seal on its stomach with its tail in the air.

But I don’t see a fish or a mermaid. Does that make me other-brained?

If I could switch between seeing a fish and a mermaid instead of a horse and a seal, would that mean I’m switching between being ‘right-brained’ and being ‘left-brained’?

If a computer with pattern-recognition software identified a fish in the picture, what would that make the computer? It doesn’t even have a brain.

Surely the meme didn’t originate with neuroscientists, and I have no doubt some will see it as a joke, but the meme rests on a cultural background which focuses, as usual, too much on hardware and casts people as mindless automata.

Why explain the phenomenon of different people seeing different things in this picture in terms of brain halves when it is much better explained in terms of different ideas and preferences? When children learn to identify and interpret what they see around them – this ability isn’t inborn – they come up with different ideas about how to do just that. Countless iterations of error correction will make their shape-recognition algorithms converge to a high degree, but, particularly for ambiguous shapes, people will creatively find different answers.

That’s why people see different shapes in the picture above. Not because of their brains!

You seem to criticize the idea that brains and in-born brain strength affect our behavior and experience.

Are you claiming every brain is the exact same universal computer?

How do you explain phenomena such as autism, synesthesia, and intelligence differences?

You seem to criticize the idea that brains and in-born brain strength affect our behavior and experience.

I criticize the idea that what we see in the image above is determined by whether we’re “left-brained” or “right-brained”, as the image claims. I do not doubt that our brains “affect our behavior and experience” to some degree.

Are you claiming every brain is the exact same universal computer?

How do you explain phenomena such as autism, synesthesia, and intelligence differences?

I don’t know enough about autism and synesthesia to say. Differences in intelligence are really differences in knowledge – more precisely, quality of knowledge. Those differences are easy to explain from a Popperian standpoint: two different people often come up with different answers to different problems (and sometimes even to the same problem). More generally, we all create different knowledge in response to the problems we face. As a result, your knowledge may be better in some regards than mine, and so you’re more intelligent in those regards than me.

Next to the universal explainer ability (which is a piece of software that all humans have), there are hardware differences between people, i.e. their brains. This explains why some humans are “less intelligent”. I’m talking about intelligence as measured by the g factor (see also https://www.nature.com/articles/nrn2793). Do you claim this measure is completely explained by “differences in knowledge or its quality”? Note that these test usually test cognitive processes such as working memory.
I agree that some parts of this effect are due to your upbringing and previously acquired knowledge etc. but you’d have to explain a lot of scientific evidence to deny the existence of hardware differences.

*you’d have to explain away

You linked to a Wikipedia article on the ‘g factor’. It states:

And it presents an open problem:

The measured value of this construct depends on the cognitive tasks that are used, and little is known about the underlying causes of the observed correlations.

How about this: some knowledge has reach, as David Deutsch would call it. Sometimes, when some knowledge can solve this problem, it can also solve that problem.

In light of that, let me get to your question:

Do you claim this measure is completely explained by “differences in knowledge or its quality”?

Not completely. But it is partly (I think mainly, for most people) explained by the quality of knowledge, and that quality is partly determined by reach (greater reach is better than lower reach). There are hardware differences – the most important being processing power and memory capacity, as with any computer. Those will affect one’s abilities, too. As will some other hardware issues, such as whether one is blind. Even then, just improving the hardware doesn’t always lead to an increase in what some might consider intelligence. Let me link to my article on curing blindness again – suddenly being able to see can cause much confusion, but it is definitely a hardware improvement. The boy in the linked article mostly enjoys his new ability – enjoyment can be an indication that knowledge is being created – but one could imagine a case where such a sudden hardware improvement overwhelms the subject completely and consequently stunts the growth of his knowledge. In which case quality of hardware and software (knowledge) would be inversely correlated. So it really depends.

By the way, you quote me as saying “differences in knowledge or its quality”, but I didn’t write that anywhere. The correct quote is “differences in knowledge – more precisely, quality of knowledge”. If you mean to use scare quotes, or if you want to use quotation marks to refer to abstract concepts or phrases, or for anything else, really, I suggest you use single quotes (‘ and ’) and reserve double quotes only for literal quotations. I learned this approach from Deutsch. (As I did much of my stance on brains vs. knowledge, see e.g. this interview with him.)

I agree that some parts of this effect are due to your upbringing […].

I didn’t say that, so you can’t agree with me on it.