In Solidarity with Salman Rushdie

This incident marks yet another of the countless attacks by violent muslims on peaceful people for the ‘crime’ of disrespecting muslim sensibilities.

I am no expert on Rushdie or his background. I don’t know all of his views and may disagree with some of them, and he may disagree with mine and even find this article to be in poor taste. I haven’t read any of his books. Nor am I an expert on islam or islamism, and the situation is still developing. But I will stand up for freedom of speech.

As the linked article states, it appears that Rushdie has had to fear for his life since 1989, when “Iran’s revolutionary leader Ayatollah Khomeini issued a call for his death” one year after Rushdie published his novel The Satanic Verses. The book appears to be controversial from a muslim perspective.

It is being reported that Rushdie was stabbed in multiple parts of his body, including his neck, and may lose an eye. The suspect is 24-year-old Hadi Matar from New Jersey. He’s said to be sympathetic to Shia extremism.

Someone who writes a book that pisses off a murderous cult this much has my respect. So I immediately bought the book out of solidarity. I may or may not read it – that’s not important. What is important is that one should pronounce judgment, as Ayn Rand said. Because what happened here is what she would call “plain, naked human evil”.

Sam Harris, an avid critic of religion in general and islam in particular, has rightly raised the issue of secularist cowardice (I’m merging his two tweets without his ellipsis for increased legibility):

Like many of you, I’m thinking about Salman Rushdie now.

The threat he has lived under for so long–which was so horrifically realized today–was the product, not merely of the hatred and zeal of religious fanatics but of the cowardice and confusion of secularists. Everyone in arts and letters should have stood shoulder-to-shoulder with Salman in 1989, thereby distributing the risk. And the fact that so few did is a moral scandal that still casts its shadow over the present.

Harris is right that the risk should be distributed. That’s one of the main reasons I’m writing this article. As many said after the Charlie Hebdo shooting, we should all be drawing cartoons of Muhammad. Freedom of speech should always win over arbitrary muslim sensibilities. Muslims are not allowed to mock their ‘prophet’ or depict him – everyone else is.

So, out of solidarity with Rushdie, here are some ‘AI’-generated depictions of Muhammad eating pork (more text below). They’re not real photos of real people. Think of them as photorealistic cartoons. Thanks to Amaro Koberle for generating these using Open AI’s tool Dall-E. (The cowards at Open AI won’t accept prompts that include the phrase ‘prophet Muhammad’; only “man in turban eating pork” worked. But the men in these pictures are all meant to be Muhammad.) 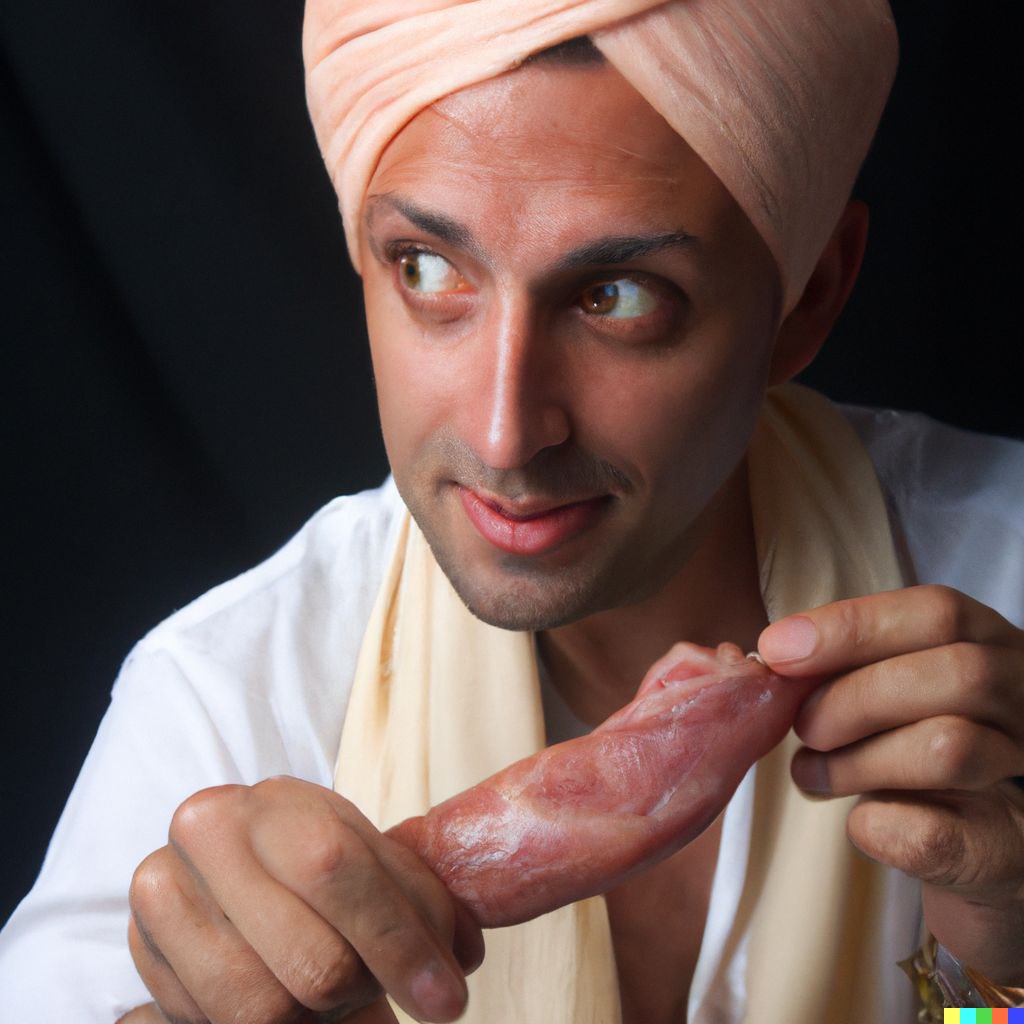 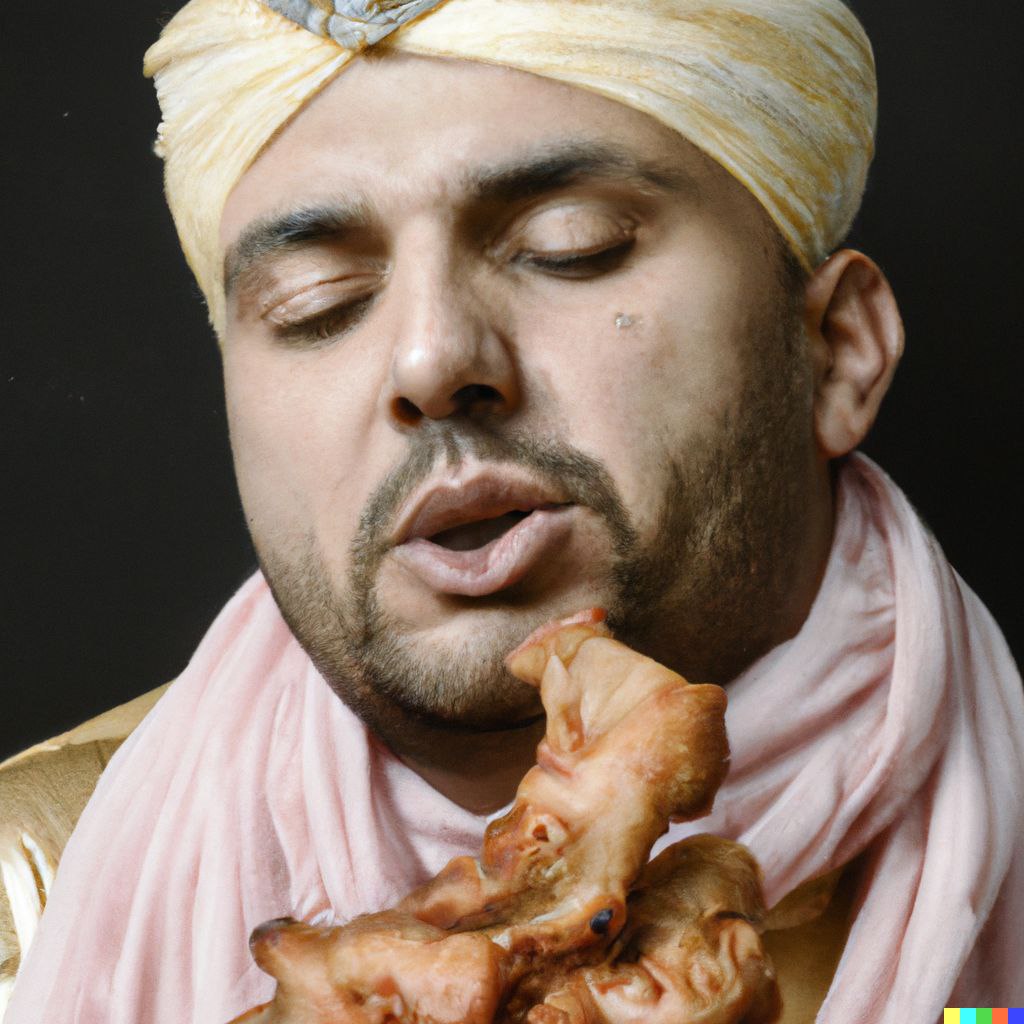 Oh he can’t wait to dig into that. 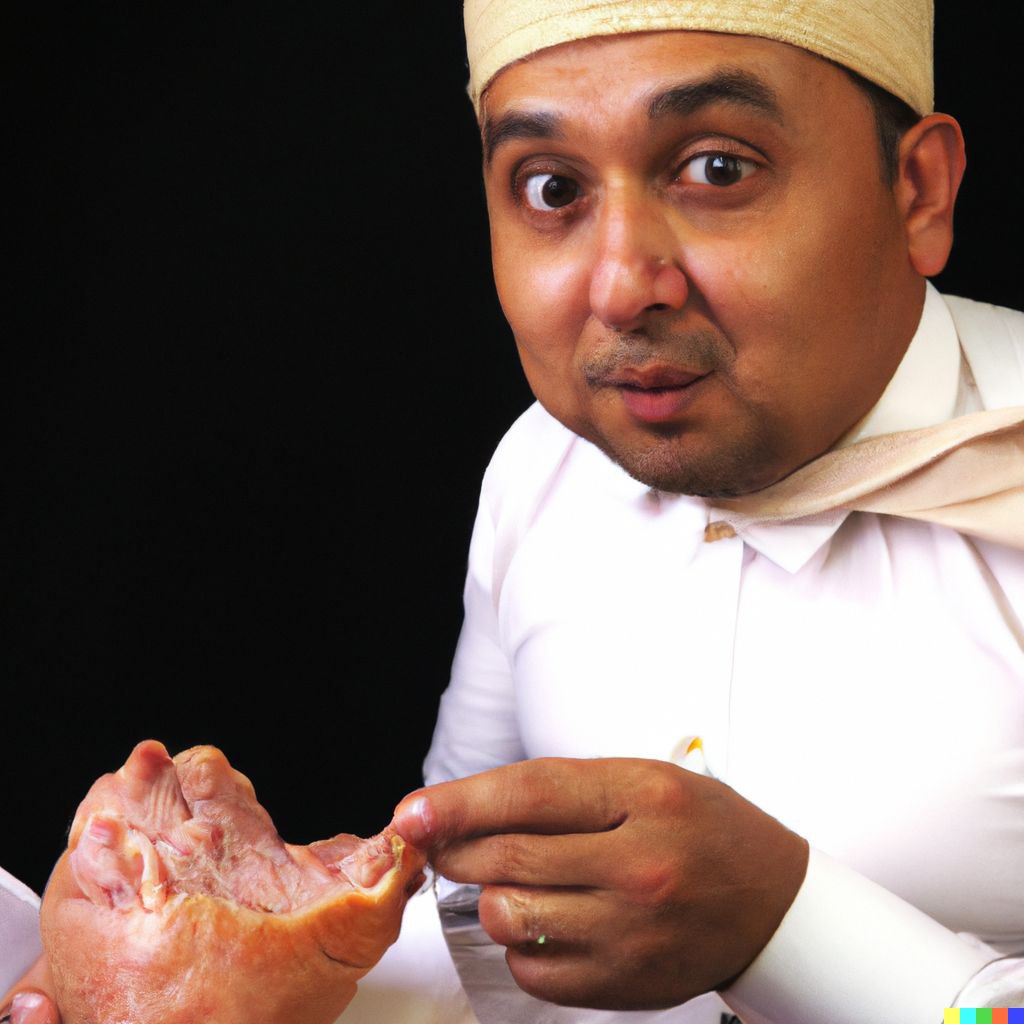 Muhammad loves him some good pork. 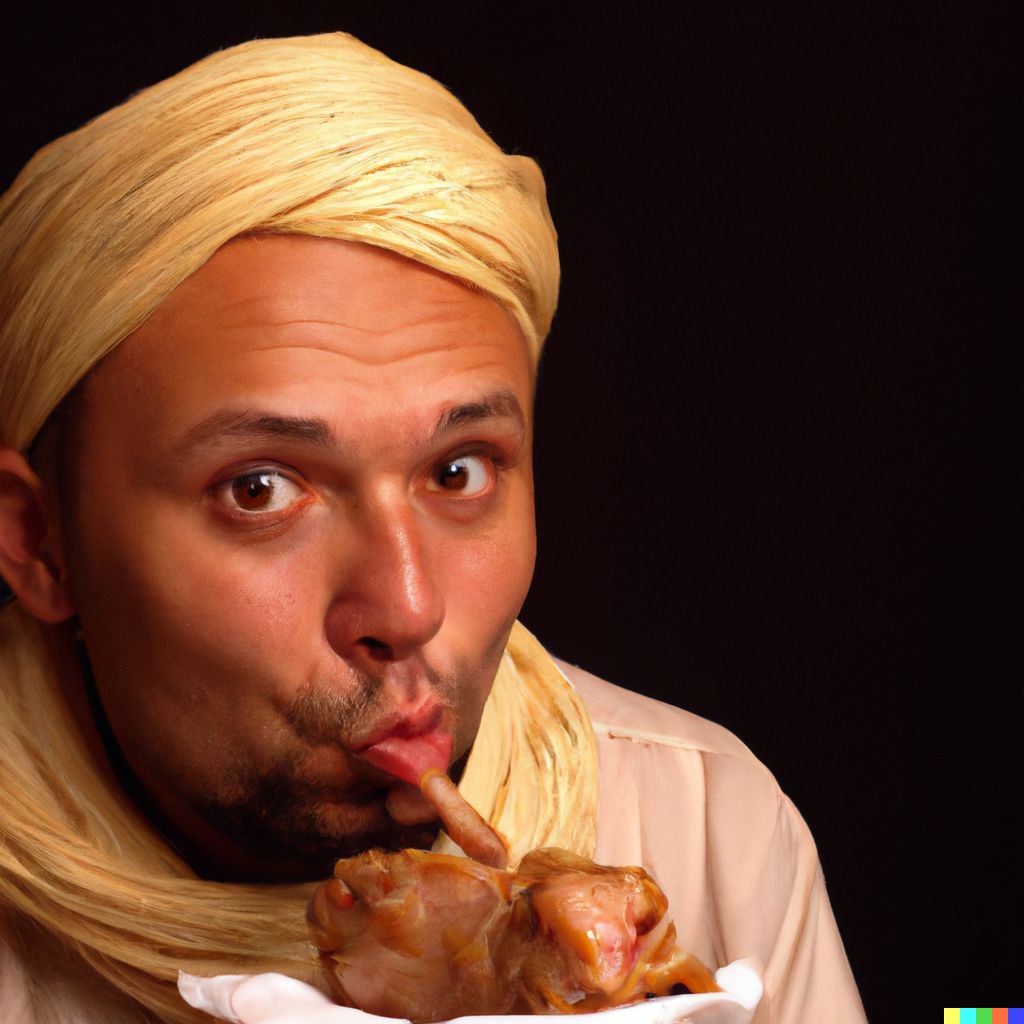 Great post! You forgot to add that the prophet muhammad also loves having gay sex

Mohammed forbade pork meat because he wanted all the bacon for himself. Greedy!