I want to make some observations on how people have been reacting to Russia’s invasion of Ukraine.

First, I am no expert on what’s happening there, which brings me to my initial observation: that many of those who tweet about the war speak with the confidence of an expert. But they can’t all be experts because there aren’t millions of them not residing in Ukraine.

Second, big tech companies, in their pathetic left-wing desire to belong and be ‘the good guys’, jump on the opportunity to signal their support even though their business has virtually nothing to do with the war.

GitHub, a collaboration tool for software engineers, has a prominent banner on their homepage when you’re logged in, with their logo in the colors of the Ukrainian flag: 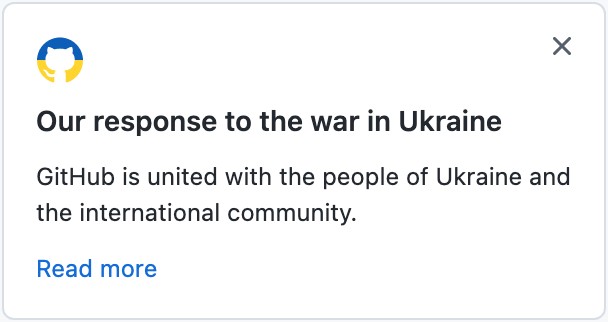 Oh good. But what does collaboration in software engineering have to do with war or humanitarian aid?

They link to an article titled ‘Our response to the war in Ukraine’. GitHub, you don’t need to respond to that. You’re not a press secretary. You’re in the business of building tools for developers, not commenting on global politics. The author starts the article by saying “I wanted to share [something oh-so relevant in these challenging times] with our Hubbers” (emphasis added). Hubbers! ‘Yes, it’s a response to war, but that’s no reason for us not to have fun, right guys?’ The article piggy-backs on others using GitHub to provide humanitarian aid, showcases what goody two-shoes GitHub are by complying with any and all regulations, and then closes with a Corona-esque section on how they prioritize “Hubber safety and well-being”. Corporate virtue signaling at its finest.

Slack, a site for chatting with coworkers, has likewise changed their logo to match the Ukrainian colors.

React, a popular (but awful) library for web development created by Facebook – again, nothing to do with war or humanitarian efforts – has a prominent banner at the top of their homepage:

A competing (and comparatively less awful) product, Angular, created by Google, has the identical banner on their website. I’m no lawyer, but whoever posted it first may well have a valid copyright claim against the other:

It’s the same banner, down to capitalization and punctuation! It seems as though one rushed to imitate the other so as not to be behind in the social-justice-warrior popularity contest. At least Amazon has shown a little more creativity:

Google has published a statement on Ukraine. Tim Cook, CEO of Apple, has tweeted about being “deeply concerned” about it. Cook in particular posts lots of social-justice-warrior content on his Twitter page, such as the altruist “Life’s most persistent and urgent question is, ‘What are you doing for others?’” quote by MLK and the pronouns in his bio, and his tweets about Ramadan and ‘trans visibility day’. Can you imagine Steve Jobs tweeting any of this if he were still alive?

Only a few weeks ago, every big tech company was an expert on immunology and the spread of viruses. Now they’re experts on foreign policy. The same goes, as others have pointed out, for all those Twitter users who comment on the situation in Ukraine as if they knew what they’re talking about, even though they’ve never once tweeted about Ukraine before.

The whole thing is a bit reminiscent of when a celebrity dies. Suddenly, everyone tweets about how that death has impacted them personally and how much they admired that celebrity. Only they never once spoke about that celebrity when he was still alive.

These corporations’ support feels orchestrated and insincere. It seems to come from a place of: ‘if we don’t post these banners or make these statements, people will judge us for it’. It does not feel like people coming together in a beautiful display to fight injustice – it feels fake.

Third, when behavior is repeated so accurately, rapidly, and on such a large scale, that should make us skeptical. The two competing projects posting the same banners are a prime example of that.

From David Deutsch’s The Beginning of Infinity, chapter 15, section ‘Living with memes’:

[W]henever we find ourselves enacting a complex or narrowly defined behaviour that has been accurately repeated from one holder to the next, we should be suspicious.

Fourth, as much as I have criticized corporations, corporate donations – such as the ones by Google – are still infinitely better than government donations. Why? Because corporate donations are voluntary, whereas governments extort money from their subjects at gunpoint – taxation is theft – and so whatever government money goes to Ukraine is blood money. Of course, no American is morally obligated to help fix the misery in Ukraine, but if they want do, they’re free to. As of March 16th, 2022, however, the Biden administration has spent $2 billion in blood money on Ukraine, without the American people’s consent.

From what I’ve read, it certainly seems to me that Russia is aggressively attacking Ukraine and that Ukraine should defend itself. I know virtually nothing else about these countries, so I won’t comment further, except to say that before this war started, Ukraine wasn’t this angel of a country it seems to be perceived as now – it definitely wasn’t considered one of Europe’s finest. Does that justify war? No, that’s not what I’m saying. But I certainly won’t blindly ‘stand with Ukraine’ like everyone else who’s stopped thinking for themselves.

You’re not supposed to criticize Ukraine. You’re supposed to go along, support the underdog uncritically (and pay his expenses along the way). This uncritical attitude is dangerous, especially in foreign politics, where one hasty decision due to cultural pressures can change the course of history for the worse.

Everyone suddenly pronouncing the Ukrainian capital ‘Keev’ instead of ‘Kiev’ is another thing that should make us suspicious.

Grammarly, an online writing tool, has also changed the colors of its logo to resemble the Ukrainian flag:

And they have added a banner at the top of their homepage saying:

Grammarly stands with our friends, colleagues, and family in Ukraine, and with all people of Ukraine.

They also link to a statement about the war. Judging by that, Grammarly’s case seems to be more genuine and less about seeking approval since “Grammarly was founded in Ukraine; [their] co-founders are from Ukraine, and [they] have many team members who call Ukraine home”. However:

We have also made the decision to block users located in Russia and Belarus from using Grammarly products or services.

It’s not clear to me what good that does. It seems to only punish the citizens of Russia and Belarus, who are not to blame.

Grammarly’s favicon (the little icon in browser tabs) is also in the Ukrainian colors, but for some reason the archiving site did not capture that.